One of the key concepts that make Prisma unique compared to other database abstractions is the Prisma schema – a human-readable declarative representation of your data model. The Prisma schema is your primary touchpoint for database-related workflows like data modeling and the source of truth for a lot of Prisma's magic under the hood – automatically generating database migrations and the fully typed Prisma Client.

Schemas are a powerful concept in software development – they allow you to take a declarative approach and maintain a separation of concerns to a considerable degree by decoupling business logic from the shape of data.

Moreover, schemas have the property of being parsable, which opens the window to automated tooling that equips developers with a tight feedback loop informing you about errors in your schema, automatic formatting, and suggestions to avoid common pitfalls in your database schema design.

The Prisma schema language tries to strike the right balance between being self-explanatory and expressive. Self-explanatory means that even with no familiarity, you can still comprehend the data model, and expressive –in this context– means that you can effectively design your desired database schema without falling back to raw SQL (with relational databases).

To make it even easier to learn and evolve the Prisma schema, we've built the Prisma Visual Studio Code extension that helps create a tight feedback loop right within your code editor and has already been downloaded by over 170 thousand developers.

In essence, the Prisma VS Code extension removes much of the burden of learning yet another DSL (domain-specific language) with the following functionality: 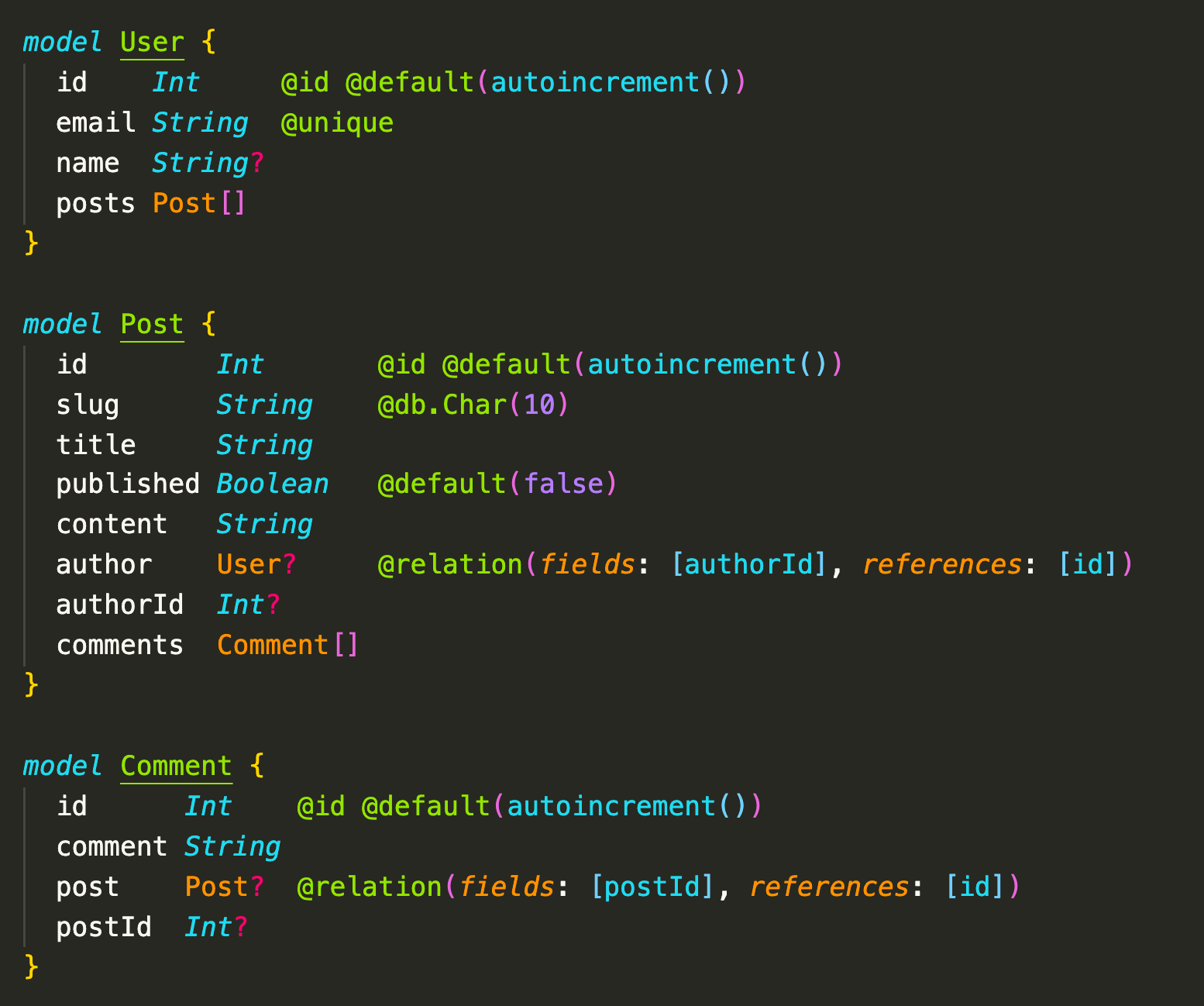 Formatting ensures consistent indentation of your models for easy readability

Linting shows inline errors in the schema, and autocompletion assists in defining the correct type

Visual Studio Code extensions use the Language Server Protocol (LSP) to standardize communication between language-specific tooling and the VS Code. This approach decouples the responsibilities into two parts:

The benefit of this approach is that LSP-compliant extensions can be written in any language (e.g. Rust) for any language (e.g. the Prisma schema language). Separating the Language Server into a separate process ensures CPU-bound tasks don't slow down the editing experience.

Furthermore, the Language Server can be reused for multiple LSP-compliant code editors, which include Neovim, emacs and Atom, in addition to VS Code.

This allows VS Code extensions to implement language-specific autocomplete, error-checking, jump-to-definition, static analysis, and many other language features supported by VS Code.

Developer tooling with Rust at Prisma

At Prisma, we love Rust and use it to build much of Prisma's core functionality. Rust is a highly optimized systems programming language that can be compiled to binaries for multiple platforms.

For the VS Code plugin to provide useful feedback about your Prisma schema, we rely on the prisma-fmt engine, which is written in Rust. The engine takes the Prisma schema as input, parses, formats it, performs static analysis (linting), and provides the formatted schema along with feedback such as errors and suggestions.

From a technical perspective, the Prisma VS Code extension has three main responsibilities:

Because the runtime for VS Code extensions is Node.js, while the prisma-fmt engine is written in Rust, the Language Server code needs to start a side-car binary.

Architecture diagram of the extension before the change

Historically we saw a cluster of problems that were difficult to reproduce and fix due to this complexity. This prompted us to research ways to simplify the extension codebase.

WebAssembly is a new type of code that can be run in modern web browsers and Node.js — it is a low-level assembly-like language with a compact binary format that runs with near-native performance. Seeing as VS Code is built with Node.js,

WebAssembly is designed to run alongside JavaScript, allowing both to work together natively. Because the prisma-fmt engine is written in Rust, it can also be compiled to WebAssembly, thanks to Rust's mature WebAssembly tooling. This means that WebAssembly modules can be imported natively into VS Code extensions.

Compiling the Prisma engine to a WebAssembly module instead of a platform-specific binary has several benefits: 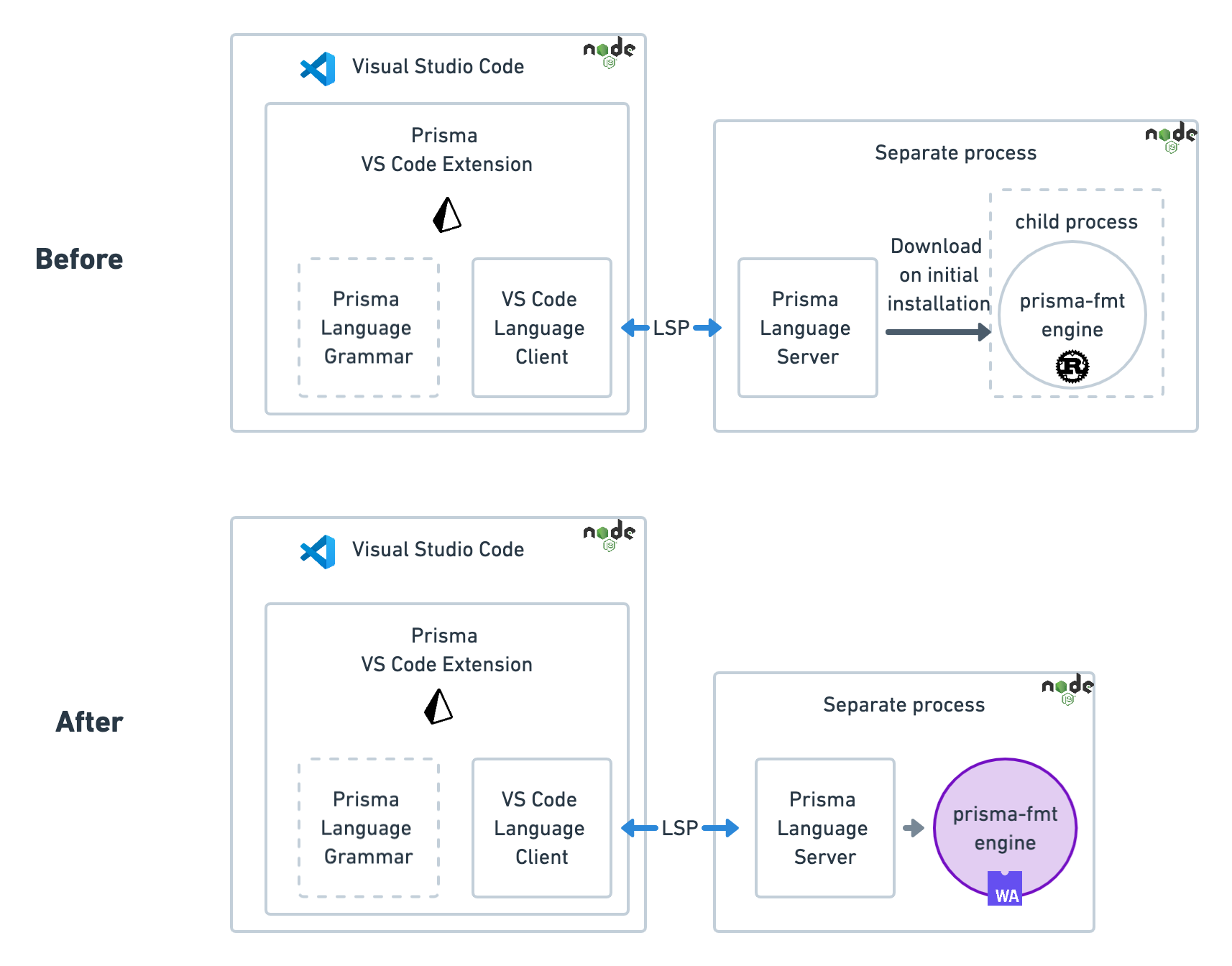 Architecture diagram of the changes

The Prisma VS Code extension is a key pillar for Prisma's developer experience, creating a tight feedback loop as you design and evolve your Prisma schema.

Reducing the complexity of the underlying implementation can increase stability and allow us to introduce new features more rapidly.

WebAssembly has played a significant role in this, giving us seamless interoperability between Node.js and Rust code while simplifying and consolidating publishing with npm.

This is all cutting-edge technology. While it has passed rigorous testing internally and we're confident about its stability, such fundamental changes can introduce bugs. If you encounter any problems or bugs, be sure to open an issue.

For Prisma, this is exciting as it is the first time we deploy WebAssembly to production and opens the door to many other potential improvements.

The new version of the Prisma extension for Visual Studio Code is available today as part of the 3.6.0 release.

Upgrade the extension in VS Code for the same developer experience you love.

If you found this blog post interesting and want to work on the future of developer tools for databases, Prisma is hiring! Check out our current open positions. 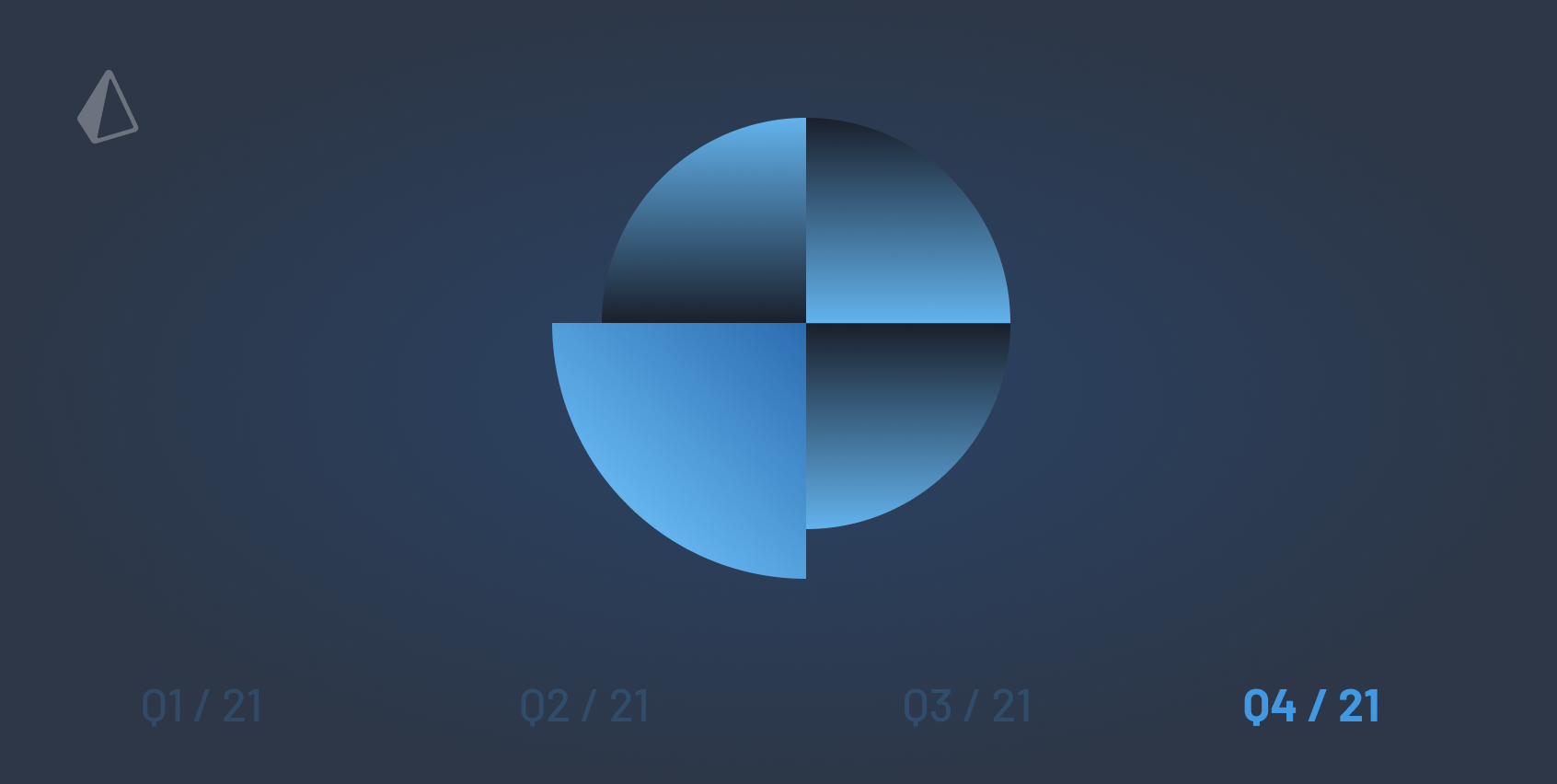 Learn about everything that has happened in the Prisma ecosystem and community from October to December 2021. 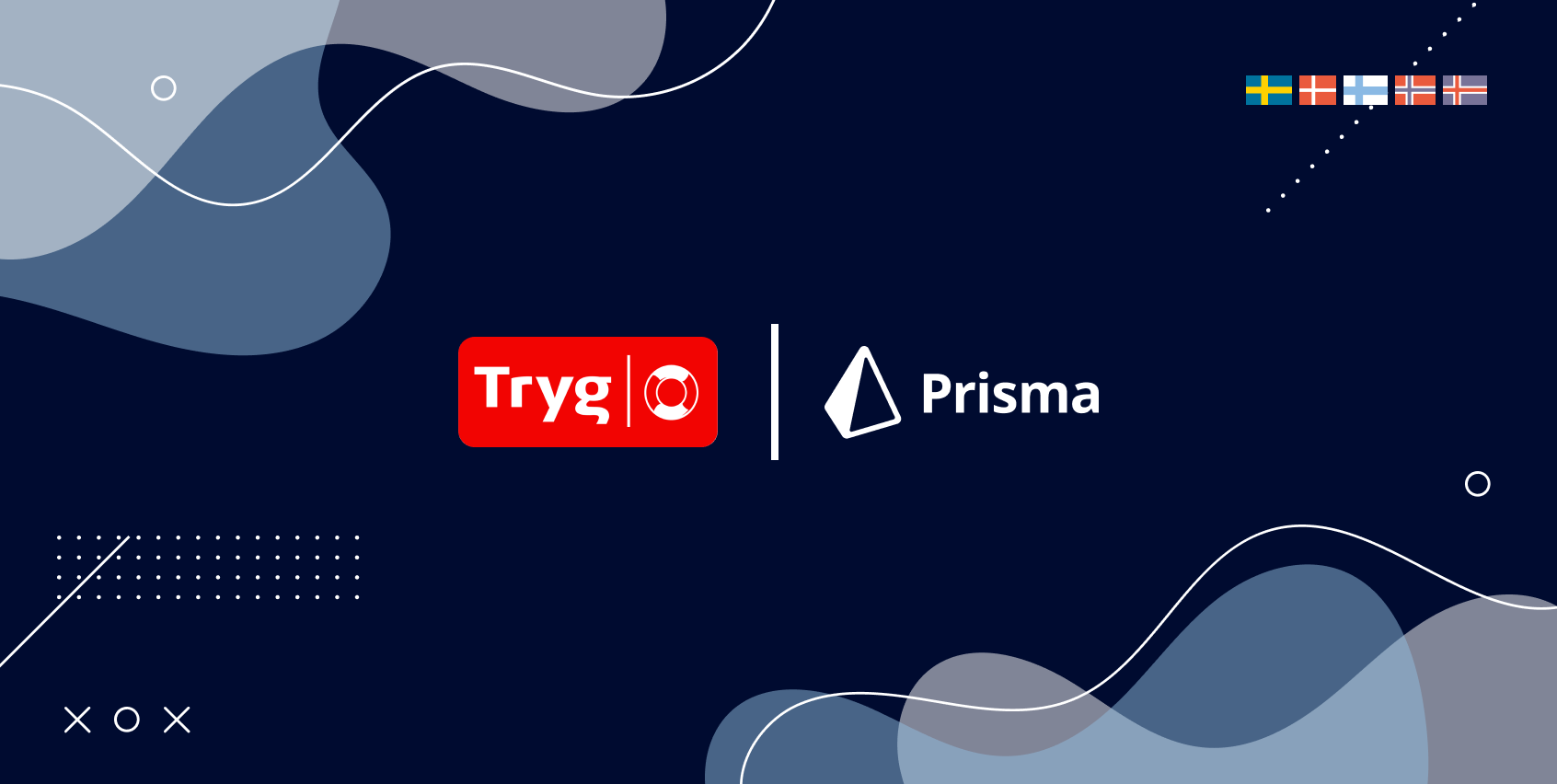 How Tryg has leveraged Prisma to democratize data

Tryg saved huge amounts of time thanks to its “360” Data Broker platform that accelerated development cycles by removing the overhead incurred by configuring environments manually. Prisma was the critical technology that enabled them to democratize billions of records from different data sources. 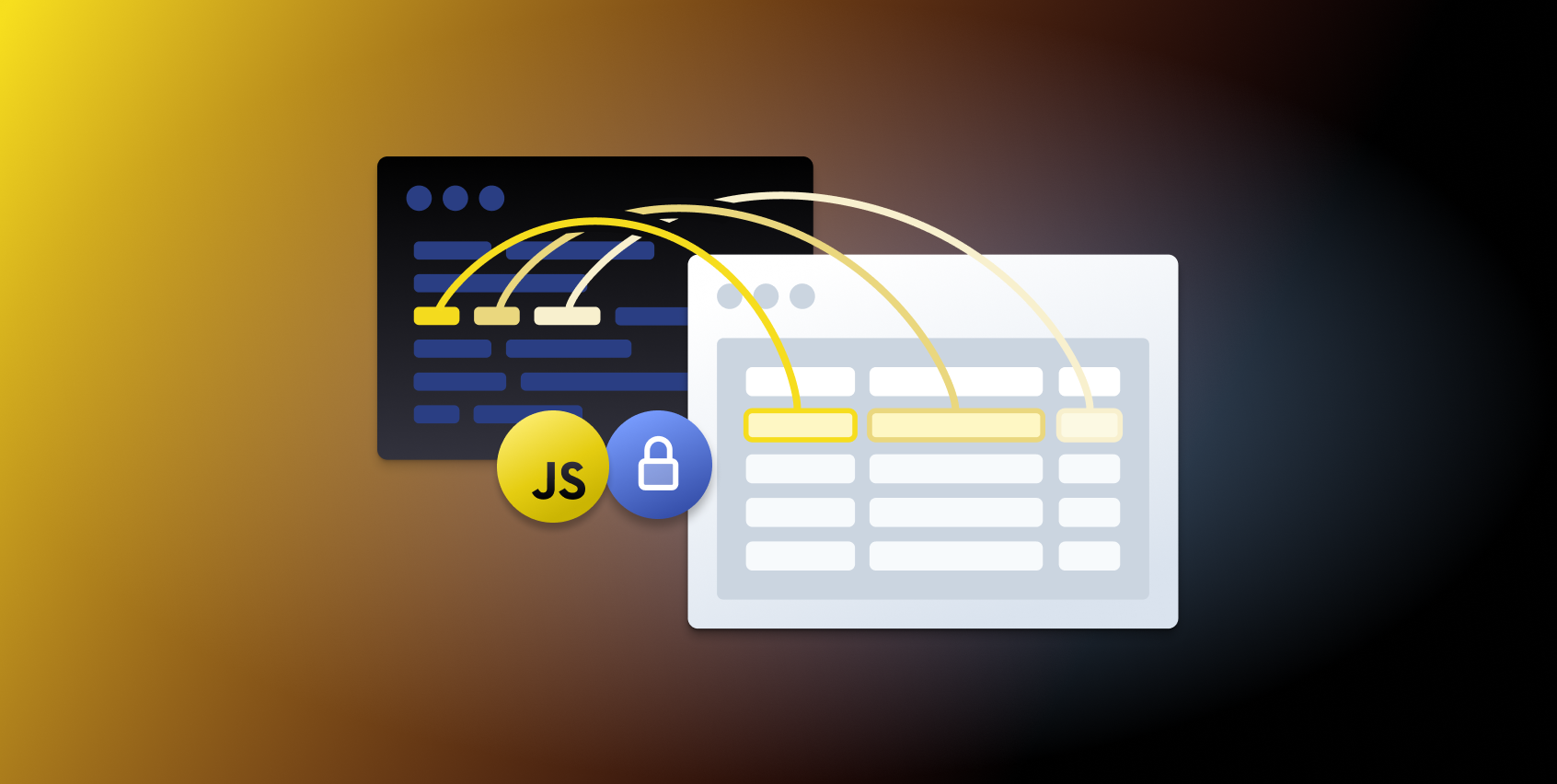 JsDoc is a great tool for documenting code and providing type-safety in your JavaScript project without any additional configuration. Learn what JsDoc is, how it works, the benefits it provides, and how to use it in your project.